Letter to a Student Gun Activist

Having received and responded to several letters from Portland-area students complaining about the MCRP's position on anti-Second Amendment indoctrination in the schools, it seemed useful to print one of those letters and the response.  As the sender remains a minor, I will redact the name and contact information.

First, please allow me to introduce myself. My name is ___________ and I am a senior at _______ High School in Portland, Oregon. I organized the _________ Student Walk Out on March 14, 2018. I was also a student organizer for the March for Our Live PDX and was in charge of the logistics and internal communication for the event. For the past few weeks, a few students have asked me to write you a letter expressing my concern with your point of view on the issue of gun control. I know that the student organizers have been writing you letters. Your previous responses to my fellow students are very political; you avoided answering anything directly and did not address any statements/questions asked of you. I sincerely hope you will read this letter slowly and carefully, and will put some effort into comprehending the entire letter and not just pick and choose the part you want to read.

It was bad enough when Portland Public Schools, becoming infamous for poor educational quality, wasted precious instructional time in a National School Walkout organized by the Left. At Sunnyside Environmental School and perhaps others, the events persisted for a second day, with roughly a hundred students released again from class to march down through Southeast Streets chanting “hey ho, hey ho, the NRA has got to go.”  (A thirty-second video of the tail end of the march can be seen at:

Rifle Raffle for the Smith & Wesson MP-15 has Ended!

The raffle for the Smith & Wesson MP-15 set to end on December 4th has ended.

The winner was drawn on Monday at 6 PM. The Winner was notified and the his name has been left at the dealer.

We the Mulnomah County Republican Party thanks everyone who purchase their tickets. We sincerely thank you for your participation.

If we hold another raffle in the future.. we will try to get the word out without spaming email addresses.

The Multnomah County Republican Party (MCRP) today wrote a letter to President Trump, warning that a judicial selection committee screening selections for the federal judiciary contains one Republican, four Democrats, and one Independent.  MCRP Chair James L. Buchal stated:  “we find it impossible to understand why a Republican administration would knowingly establish a judicial selection committee controlled by Democrats.”

Below is the text of some remarks made by Chair James Buchal to the monthly meeting of the Downtown Republican Women on November 8, 2017. not including improvisations.

I want to talk to you today about just how bad things really are and why I think it's important for you and others to step forward and try and make them better.  And I am going to use some strong words, like calling people commies, and calling them enemies, and I want to give you an explanation of why I use words like that.

In response to a press release by the Democratic Party of Oregon, Multnomah County Republican Chair James Buchal issued the following response. 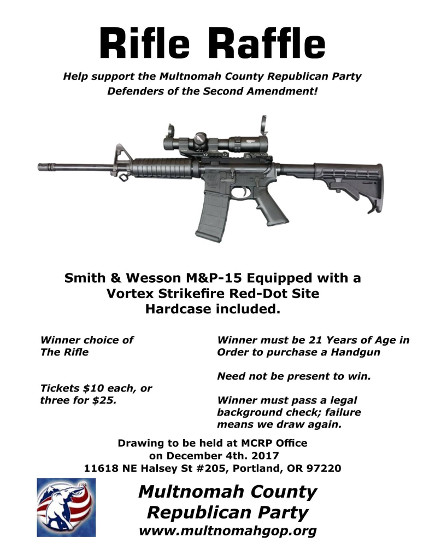 Why the MCRP Will Accept Volunteer Security Services

Multiple sources have requested an explanation for the decision of the Central Committee of the Multnomah County Republican Party at its Monday, June 26, 2017 meeting, to adopt the following resolution:

“Resolved that the MCRP may utilize volunteers from the Oregon Three Percenters, Oath Keepers, and other security groups to provide security where such volunteers are certified to provide private security service by the Oregon Department of Public Safety Standards and Training.”

The cover of this week’s Portland Mercury asks readers to turn to page seven to learn how “Republicans’ Health Care Meddling Could Screw the County”.  The story, however, documents how Multnomah County is now set to spend $19.3 million this year on inmate healthcare, up from just $13 to $14 million as recently as 2011.

MCRP Speaks Out Against Racist Attacks on Portland Child

The Multnomah County Republican Party is saddened to learn that a Hosford Middle School student was recently accosted by men shouting racist slurs, and that groups have been putting up racist flyers in that neighborhood.  “I said at the June 4th rally, and I’ll say it again:  there is no room for racists among the patriots trying to restore constitutional government to this country,” said Multnomah County Republican Party Chairman James L Buchal.

Political Polarization and Safety in Portland

Last week’s murders have all of us thinking about the rising political polarization in this country and this city.  The tragic deaths of the heroes who stepped forward to protect vulnerable women from abuse anger us all.   Many people feel less and less safe as political tensions rise.

Early Accomplishments of the Trump Administration

With an avalanche of negative media attacks against the Trump Administration, it is easy to lose sign of the concrete accomplishments, including signing thirteen Congressional Review Act (CRA) resolutions in his first 100 days, more than any other President. These resolutions nullified unnecessary regulations and blocked agencies from reissuing them.  President Trump also signed 30 executive orders during his first 100 days, and has worked with Congress to enact 28 laws during the first 100 days of his Administration.  Below is a timeline of accomplishments to help us all remember that things are better than the media makes them look.

Earlier this week, a notice in the Business Tribune reported that the Portland Public Schools (PPS) have already drafted findings for what they call “an exemption from the Competitive Bidding Requirement for the following work:  District-wide Fixture and Partial Pipe Replacement”.  This language refers to the poster child for the PPS bond measure:  fixing the lead problem PPS concealed for years.

Portland Public Schools and the Anarchy in Portland: An e-mail from Kate

A concerned Portland parent writes to the Multnomah County Republican Party about a revolution in education within the Portland Public Schools.  As the schools teach a history focused on race, gender and oppression, they raise a generation that is no longer a united America, but a seething mass of conflicting groups.  Deliberately-engineered ignorance of American history is a threat to us all.  If, after reading this "Letter from Kate," you are interested in meeting with other concerned parents in Portland to work for reform, let us know.