Monday night 4/13 6pm to 9pm in Salem at the State Capitol, there will be a public hearing on ten bills regarding the minimum wage in Oregon. The bills make varying changes: raising to $10.75/hr by 2015;  raising to $15/hr by 2018; and to allow local govts to set the minimum wage.  If you own a small business, how will these bills affect it?  How will this minimum wage attract small businesses to Oregon or attract skilled workers to Oregon. Testimony is needed.

Portland and Multnomah County have had a lot of discussion and actions about minimum wage.   Tim Nesbitt, a former president of the Oregon AFL-CIO, writing in the Oregonian put forth the idea that the working poor would not have a large change in their situation but rather would find a shift of their needs being met by the employer instead of the govt because they would qualify for fewer food stamps and smaller tax credits.

There is a push on the left for this.  MoveOn.org is promoting a “Fight For $15” rally 12 noon in O’Bryant Square (SW Park and Washington St Portland) on Wednesday, April 15th. 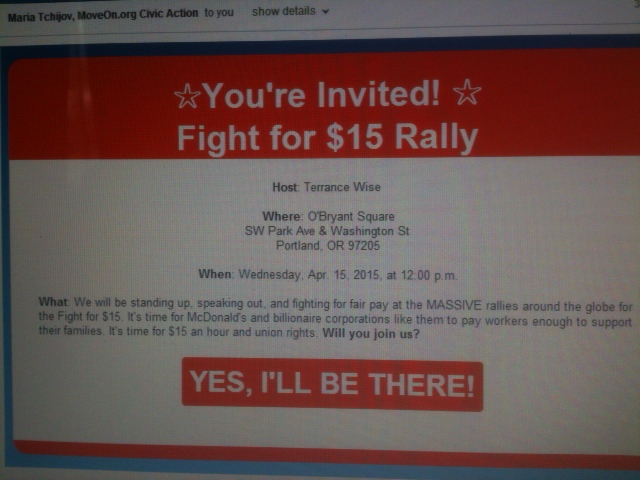