What is at Stake in the Fall Elections

The essay below is an edited version of remarks introducing candidates at the July 23, 2018, Central Committee meeting of the Multnomah County Republican Party (MCRP).  As a small minority party in Portland, we see first hand the threats posed by extreme Left politics that Republicans everywhere need to know, especially Republican candidates for office.

It is my privilege to introduce some of the political candidates here tonight, and to make a few introductory remarks about the stakes we face this fall.

For those of you who haven’t really been active, and out with us on the streets of Portland, maybe you don’t understand that we are now faced with outright war against the Constitution, and America. I’m not going to take the full time to make that case tonight, though I have put some evidence on the tables before you; I’ll say more about that at our Labor Day picnic and fundraiser on September 3rd—by the way, the tickets are now on sale on the website.

Ever since the election, we have seen a relentless campaign to call President Trump a criminal who must be driven from office. This week, he is supposed to be a Russian agent (the charges change with every new propaganda campaign). The people running this campaign have no regard for representative democracy, the Constitution, or the Electoral College.

They are no longer our countrymen. They are the same sinister force that has destroyed one country after another: those who want to impose their own power by any means necessary.

We see the communists, who now call themselves democratic socialists, more and more brazenly pushing their evil philosophy, especially here in Portland, with the help of the local governmental units that are supposed to be providing public services, not propaganda and indoctrination.

Recently, the local Antifa organization has confirmed that its members are not anarchists, that is to say those who favor total freedom over government. No, they are commies too. 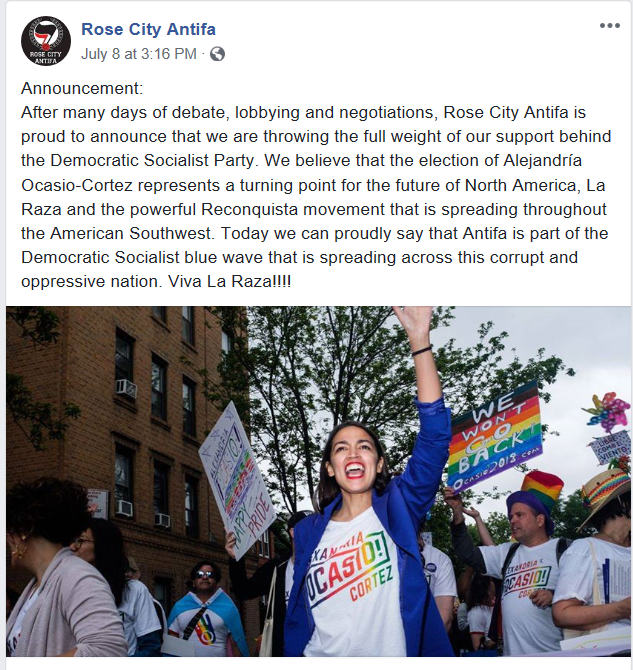 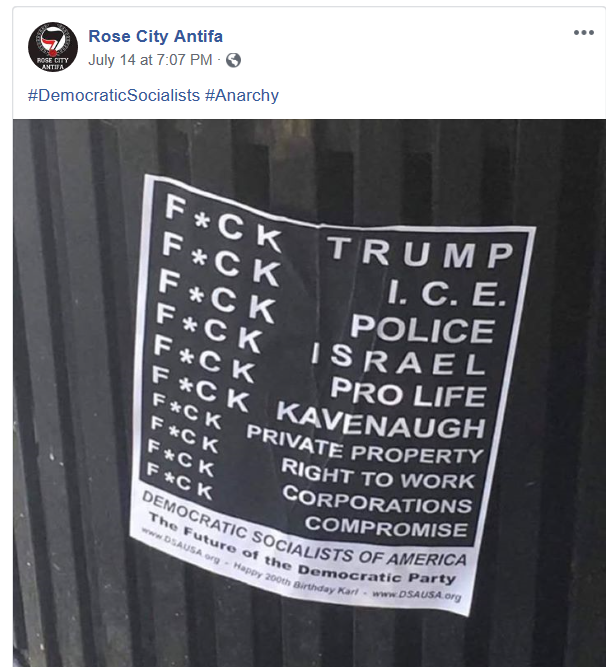 And lest you think that this is not an organized effort going right to the top, we can see that they are even raising money for Hillary: 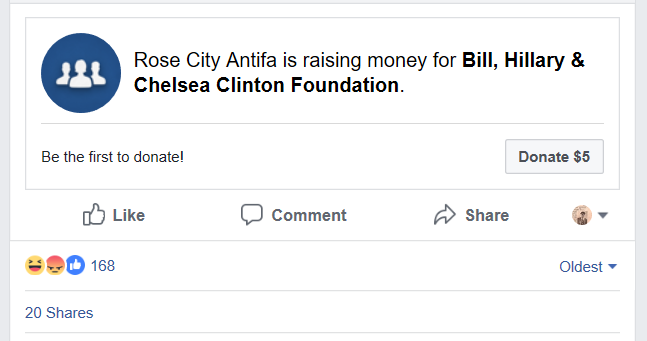 Many of these ignorant youths are the product of the Portland Public Schools, which teach that the history of America is nothing but one long narrative of oppression from capitalism, colonialism, religious belief, or “privilege”.  Some of you may know that Facebook is now flagging the Declaration of Independence as hate speech.  The response of the indoctrinated?  It's contained in this image: 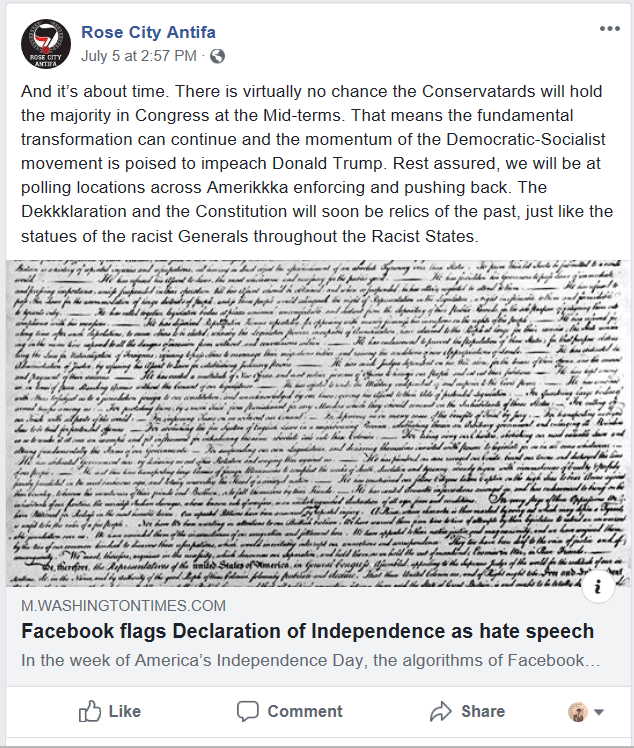 They even spell "Amerikkka" and "Dekkklaration" with a KKK, because that’s all the American history they can remember from their political indoctrination in our public schools.

Here in Portland, if you really believe in God and the Constitution and put that belief front and center, you cannot have public events without attacks from Antifa-type armed gangs. There was extreme violence at the most recent Patriot Prayer event; I’m proud to say that some of our Executive Committee members were there to defend patriotism and prayer. And they were betrayed by the Portland Police, who by all appearances set them up for attack.

The Portland government and schools foster these commie mobs, and subsidize them.  They subsidize the ongoing protests against ICE with free real estate. [Update:  the five weeks of free rent have ended.]  What are they subsidizing? Commie hoodlums assembling a guillotine and pretending to execute President Trump. 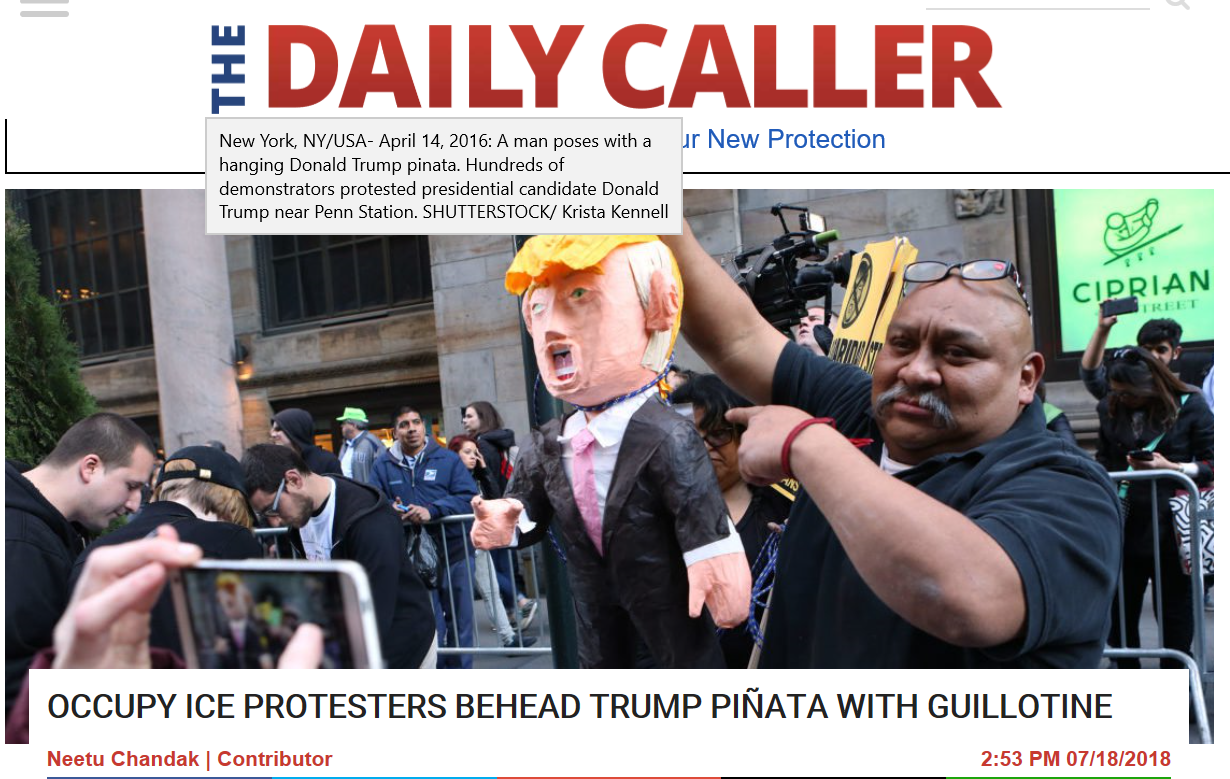 We even see area police forces firing officers who are sympathetic to patriotism and prayer; a Clark County Sheriff’s deputy just lost her job last week. They said she was a “Proud Boys Girl,” and the Proud Boys call themselves a “Western Chauvinist” group. I’m here to tell you it’s not White Nationalism or racism to say the West has provided the best opportunities for all races, colors, and creeds of any Nation on earth. It’s the truth.

And on the national level, Oregon's own Ryan Bounds was just defeated for a nomination to the United States Court of Appeals for the Ninth Circuit because he dared to defend the ideal of a color-blind nation under law by criticizing identity politics.

The end game here is obvious: anyone who speaks in favor of traditional American values, and in favor of a Constitution that restrains government, will be driven from the public square, driven from public employment, and ultimately beaten down if they try to defend our Constitution. This is the method Adolph Hitler used to gain power, and it worked. Later on tonight, Mr. Mr. Michael Strickland is going to tell you what happens if you defend yourself from a commie mob.

Some of you might be thinking, "I’m old, I’m glad I won’t be around to see this." That’s wrong thinking. Not just because it’s coming faster than you and I think, but because you are better than that. It’s not just about your future. Start thinking about your children, your grandchildren and their futures.

There is only one thing that can put a stop to this. It’s not politicians. Politicians made this country morally weak, burdened with debt, and crippled by regulation. We all have been disappointed by the people we send to City Hall, or Salem, or Washington, D.C.  We need leaders, and we need leaders with courage. And there is only one thing that will turn this country around, and that is replacing our politicians with real leaders. And that’s where those of you here tonight come in.

If you have been elected a Precinct Committee Person, you are a leader, whether you know it or not. If you tell the Republicans in your precincts what is going on, they will pay attention to you. If you don't want to tell them about Antifa and the threat to their freedom, tell them about Kate Brown and the threat to their pocketbooks.  If you don’t know who your Republican neighbors are, ask Lynette or Gini, our PCP co-chairs, to get you a list.

Because guess what. All these problems are not just the fault of politicians. It’s your fault too, and my fault, and all of us who have put up with spineless politicians to the point where real evil is now growing stronger and stronger on the streets of Portland. If there is a Blue wave here in Oregon, it’s our fault too.

I want to read to you something that the greatest black Republican of all time, Frederick Douglass, said back in 1857:

“Those who profess to favor freedom and yet depreciate agitation, are men who want crops without plowing up the ground. They want rain without thunder and lightening. They want the ocean without the awful roar of its many waters.

“This struggle may be a moral one, or it may be a physical one, and it may be both moral and physical, but it must be a struggle. Power concedes nothing without a demand. It never did and it never will. Find out just what any people will quietly submit to and you have found out the exact measure of injustice and wrong which will be imposed upon them, and these will continue till they are resisted with either words or blows, or with both."

We have all been submitting for a long time. We’ve let crooked Democrats (and crooked or cowardly Republicans, too) make a mess out of federal, state, and local policies.

We have here candidates who believe they can lead. I am asking all of you right here, right now, to not just sit like bumps on a log and listen to what they have to say. I want you to challenge them with questions. I want you to press them hard. I want you to make them think.

But I also want you to treat them with respect. Please remember what Ronald Reagan said: "my 80% friend is not my 20% enemy." If you don’t get the answer you want, ask another question, and I think you can quickly find that 80% friend in our Republican candidates.

We need leaders who will listen and learn, but they can’t get better if you don’t help them get better. So let’s give a round of applause for our candidates, and let’s help them tonight by asking them tough questions that make them think, and let’s help them going forward by volunteering for their campaigns, giving them money, and defending Multnomah County and Oregon from the people trying to dismantle America.